Timing is everything. That kind of sums it up for me for this past weekend’s workshop on Mt. Rainier.

While driving through the Columbia River Gorge in Oregon last year, Bill Fortney and I began planning our very first workshop dedicated only to users of the Fuji “X” system.  We announced this event mid-2014 and it quickly sold out.  Basically this workshop is no different from the ones we have been doing together for the past few years, but with heavy emphasis on the Fuji cameras and amazing lenses.

We were fortunate and honored to be joined at this event by Justin Stailey, Fuji’s Senior Product Manager from their head office on the east coast, Geoff Hinze, one of Fuji’s National Account Directors (Geoff lives here in Washington) and Lewis Navarro, Fuji’s West Coast Tech specialist. What a line-up! Thanks you guys and thank you Fuji. 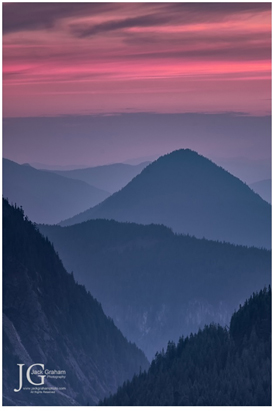 Folks, this company (Fujifilm) really gets it. They know their customers. They listen. They are doing the right thing, as well as making some of the best products anywhere for us. I have no doubt they will continue to bring us cutting edge cameras and some amazing glass. As I always say, having these tools just gives us the chance to make a good image. We still have to work hard to grow as photographers.

As always we had our “meet and greet” on Wednesday night, where we get to know each other, go over goals for the workshop and have some good company. Typically we don’t go out to photograph on that evening, but due to a few factors I suggested we take a quick ride and make a few images. First, the mountain and adjacent valleys were shrouded in smoke from a nearby fire south of the park. Second, the weather forecast was looking iffy as the weekend progressed. 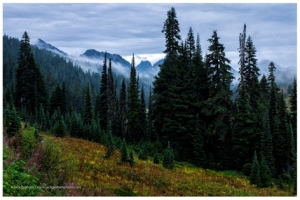 We all came back to the hotel that evening with some great images with some amazing color as well as excitement for the coming sunrise on Thursday morning – we were not disappointed! Thursday was a transition day for us weather wise. In the high Cascades weather changes feature dramatic clouds. We had them for sure. Numerous lenticular clouds were in the sky making for amazing drama. At times it looked like we were being invaded by space ships. Timing is everything! We all nailed sunrise at Reflection Lake on Thursday morning. As Thursday progressed so did the incoming weather system and with it the dramatic clouds and light. We spent the balance of the day up at the “Sunrise” area in the northeast part of Mt. Rainier National Park,  at a few locations and then driving back to Paradise in the dark. 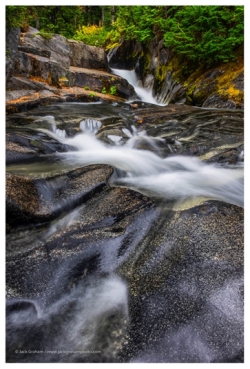 Sunrise was about 6:30 AM. I walked out of the Paradise Inn (at about 5,500 feet elevation) about 5:10 and was greeted by a downpour. Bad news … no sunrise, but good news was this rain put a good amount of water into the small streams, creeks and waterfalls. It’s been a long hot summer here in the Pacific Northwest and the rain was welcomed by everyone. (Especially the folks east of the Cascades who were and still are dealing with a 400+ square mile forest fire). We all ate a good breakfast and by about 7:45 the rain stopped. We had a great morning and early afternoon photographing the landscape with the low hanging clouds and fog as well as flowing waterfalls and streams. Timing is everything.

There is no Internet or mobile signal where we were staying at the Paradise Inn. However, up at Sunrise we located a signal and were able to access the weather forecast. This was a good thing as by Friday the forecasters were predicting a major storm for Saturday with very heavy rain and wind. They were correct. 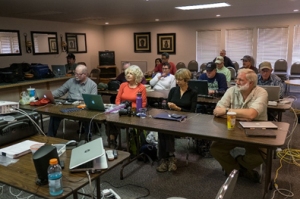 Saturday morning was dry but overcast. You could feel the storm approaching. The rain held off until late morning as did the wind. Fortunately, we were all inside doing our image reviews and presentations during the worst of the storm. Again, timing! Saturday evening cleared until late, when the rains returned in earnest. By the time we ended our workshop on Sunday it was pouring rain, windy and cold on the mountain. When Bill and I departed Mt. Rainier on Sunday it was 38 degrees and raining.

We were extra fortunate with the weather. Seattle forecasters called this storm “The Strongest Summer Storm in West Coast History.” Click HERE for a great synopsis. We had great light, dramatic clouds, great waterfalls and stream locations, etc. All in all it was a great event. 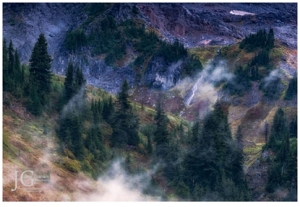 With Bill, me and three Fuji folks, we were able to give our attendees a lot of personal time. We worked with customizing their cameras to take advantage of everything Fuji has to offer. We had numerous Fuji bodies and lenses for our attendees to try out. Again, having the folks from Fuji with us was a great experience for everyone.

What’s ahead? In 2016 Bill and I are scheduling three such Fuji “X”-only events: The Smoky Mountains in mid-April, Olympic National Park in early May and Acadia National Park (Maine) in October. Stay tuned for some major announcements regarding two of these three events. Yes, they will sell out quickly! 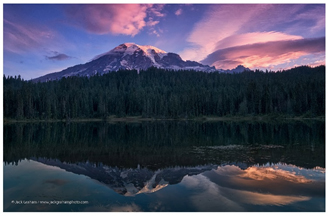 To add to the “Timing is everything” thought, tonight it’s still showering here in Washington and the prediction for later this week for Mt. Rainier is cold, rain and even snow! Has winter arrived on the mountain? Probably not, but things are definitely in transition.

Below is today’s forecast—Guess where I’ll be tomorrow!!   —-JG

THE SNOW LEVEL WILL BE AROUND 5500 TO 6000 FEET WEDNESDAY THROUGH THURSDAY…AS AN UNSEASONABLY DEEP UPPER TROUGH MOVES OVER THE PACIFIC NORTHWEST. PRECIPITATION AMOUNTS OF A QUARTER INCH TO AN INCH ARE LIKELY OVER THE HIGHER MOUNTAINS DURING THIS PERIOD…WITH LOCALLY UP TO ONE AND A HALF INCHES ON MOUNT BAKER.

THAT MEANS THAT A TOTAL OF 2 TO 6 INCHES OF SNOW CAN BE EXPECTED AT ELEVATIONS ABOVE 6000 FEET TUESDAY THROUGH WEDNESDAY…WITH A FOOT OR MORE OF SNOW AT THE HIGHER ELEVATIONS.

One thought on “Timing is Everything!” 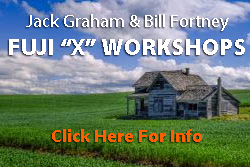 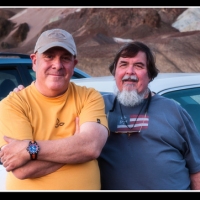 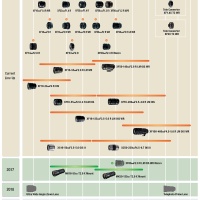 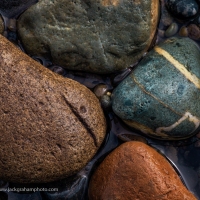 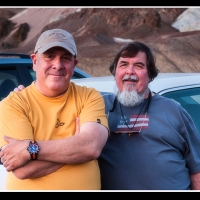 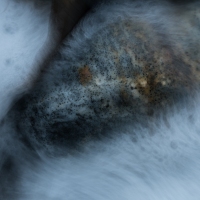 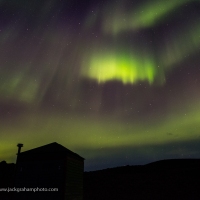 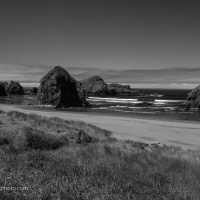 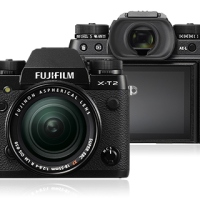 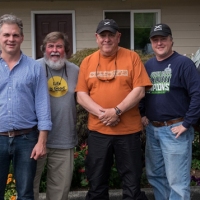